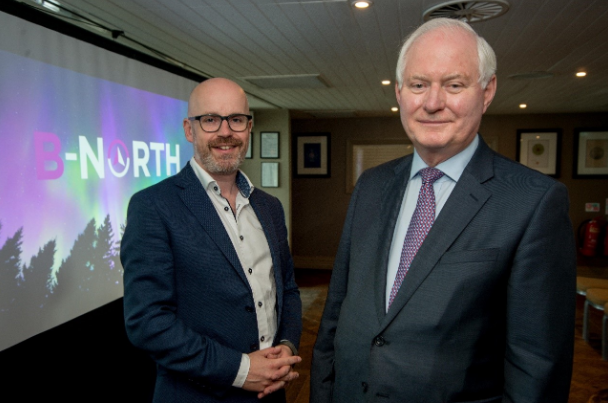 B-North has appointed Ron Emerson (pictured above, right) as its new chairman.

Ron will join the Manchester-based company — which is currently building a UK SME lending bank and in the process of gaining a banking licence — on 16th September.

He was the founding chairman of the British Business Bank, which funded more than 40,000 start-ups in the three years that he was at the helm.

Ron has also held roles as a senior banking adviser at the Bank of England, as well as 20 years as a member of the Faculty of Management Studies at Oxford University.

Jonathan Thompson, co-founder of B-North (left), said: “We’re thrilled that Ron’s joining B-North as our new chair, to lead our mission to deliver essential lending solutions for SMEs across the UK.

“His impressive track record and extensive board experience is invaluable as B-North enters the next exciting stage of its development — a banking licence and establishing localised lending pods around the UK.”

B-North’s localised lending pods model is set to operate in major cities across the UK and is expected to allow lending to be made available to SMEs within as little as 10 working days.

Ron added: “The success of SMEs relies heavily on having access to efficient funding, something which can all too often be lost due to the centralised legacy systems operated by traditional lenders.

“B-North aims to be there for SMEs at the crucial point in their development.

“I am delighted to have the opportunity as chair to work with Jonathan and the team to make sure SMEs in Manchester, and across the UK, can thrive.”