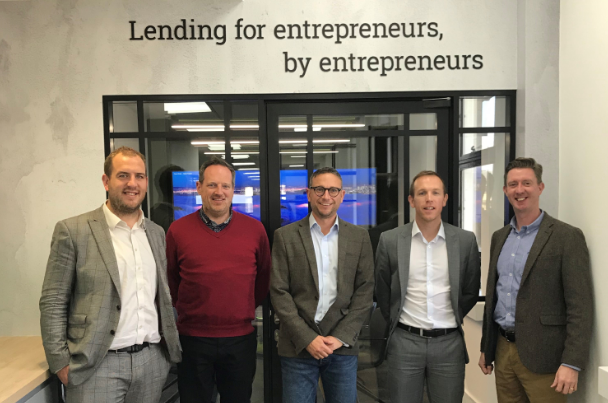 OakNorth has moved into a new office in Manchester at Ship Canal House.

The specialist bank has also hired a dedicated team which is focused on originating and transacting SME lending in the North.

Both Stewart Haworth (second from right) (formerly of Santander) and Daniel Martin (left) (ex-NatWest) have been recruited as directors of debt finance, while ex-Investec senior manager David Rowlinson (second from left) joins as director of property finance.

Dave Taberner (right) has been appointed as associate of property finance from CBRE Capital Advisors, having previously served at RBS.

“Our co-founder Rishi Khosla has always said that the best businesses thrive in times of economic turmoil,” said Ben Barbanel, head of debt finance at OakNorth.

“Despite ongoing economic uncertainty, we continue to see incredible demand from British businesses keen to pursue their growth ambitions, and because most high street banks have been retrenching from SME lending, this has only been compounded.

“One of the features about our process that our borrowers greatly appreciate is the ability to discuss their financial needs directly with the credit committee.

“To ensure we can continue offering this experience and build strong relationships with businesses and property developers in the North, we have made several senior hires in Manchester who will be originating and transacting deals.”