73% of professionals believe going mobile is the future of banking

A new poll has found that over 70% of finance professionals believe that mobile banks are the future of the banking sector .

The poll for Specialist Banking found that 73% saw mobile banks as the future for the banking industry, while 27% did not. 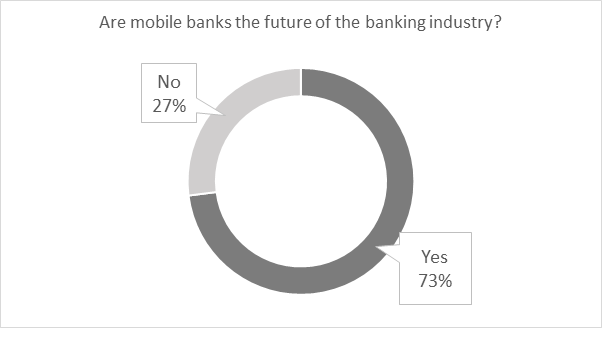 Over the past few years, more and more mobile-only banks have appeared, while traditional banks have continued to step up their mobile offerings by launching new banking apps for smart phones.

Last month, Monzo announced that it had reached over 200,000 customers with its mobile-only offering.

Mulenga Agley, VP for growth at mobile bank Monese, felt that people needed a mobile account which allowed them to live, travel and work freely anywhere in the world.

"In today's world, people are able to access almost anything immediately via their smartphone, from ordering a taxi to getting fresh fruit and veg delivered to your door.

â€œHowever, banking services have fallen behind the on-demand age.

â€œWhy shouldn't a person be able to open a new current account within a few taps of their phone, just as they would with Uber, Amazon or Netflix?'

George Bevis, CEO and founder of Tide, felt that it was no shock that people saw mobile banking as the future, but was surprised by the number who disagreed.

â€œâ€¦Perhaps this illustrates a lack of awareness of what functionality currently exists on mobile.

â€œAs mobile infiltrates almost every area of life â€“ from the way we consume entertainment through to booking travel â€“ mobile banking seems like the natural future for both retail and business banking.'

Joel Perlman, co-founder of challenger bank OakNorth, felt that the importance of mobile banking depended on the product.

â€œâ€¦In its 'The Way We Bank Now' report, the BBA forecasted that by 2020 customers will use their mobile to manage their current account 2.3 billion times â€“ which is more than internet, branch and telephone banking combined.

â€œThis is because advances in biometric security, data analytics and machine learning mean that customers can do their day-to-day banking via their mobile much more easily and efficiently than they could a decade ago.'

However, Joel felt that when it came to big money decisions, such as mortgages, there were still a lot of people who'd prefer to meet someone directly rather than doing it via their mobile.

â€œResearch from EDM Mortgage Support Services last year found that 72% of millennials expect to take out a mortgage or remortgage in the next five years, but only a quarter (26%) feel comfortable doing this online.'

Alex Letts, founder and chief unbanking officer of U, disagreed with the poll results and felt mobile banks accessed via smartphones weren't the future, but that mobile/smartphone banking was.

â€œThe future of banking does not need to be predicated against a bank model.

â€œThat is absolutely not necessary as the non-banks like U gather pace.

â€œBut, equally importantly, I don't believe the customer journey can feasibly be delivered to a mass-market scale without the support of existing banks.

â€œThe future that I envisage is a hybrid of smartphone-accessed banking applications from both new and old providers, with any scale successful new brands needing to be aligned with a legacy bank.'

However, Mulenga felt that the legacy structure of traditional banks did not allow users to access mobile accounts which let them work and travel freely.

â€œâ€¦We strongly believe that mobile accounts are an enabler of a new, more fluid lifestyle that people are increasingly choosing to live."

However, Joel pointed out that when it came to business banking, face-to-face interaction still had a key role to play.

â€œâ€¦Not everything can be done on mobile.

â€œOur borrowers really appreciate the fact that they can send us electronic copies of paperwork rather than having to come in and physically give it to us, but they also really like that they get to meet credit committee (the decision makers) directly, so we'd never stop offering this as part of our proposition.'

However, George felt that mobile banking for business was even more important when considering the rise of the freelancer and SMEs that are constantly on the move and need flexible access on the go.

â€œThe rise of challenger mobile banking services â€“ such as Tide and Monzo â€“ are eating up the market that traditional banks don't, and cannot, adequately service."